This webpage is a work in progress....


A severe injury has slowed things down, but
I'll be back at it....

This '91 Dynaglide FXDB "Sturgis" was acquired in '92 in damaged condition.
I restored it to original condition and rode it for awhile that way. 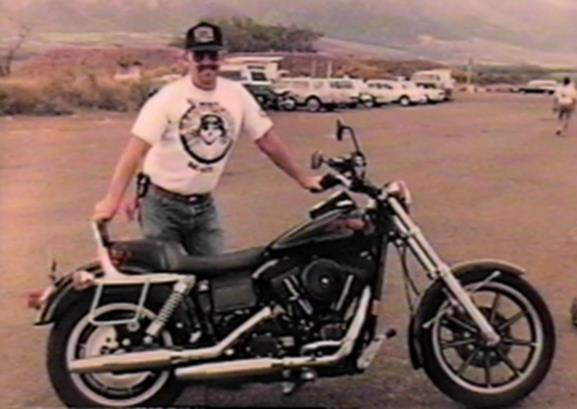 I ran it that way for a couple of years, then decided I wanted a wide glide front end
with a 16" wheel and dual disk brakes.  Bought an original '91 Sturgis rear wheel,
put on a wide glide, and fitted twin disks to the front 16", but keeping the black
Sturgis tank and rear fender, and painted a wide glide front fender black.
Installed tall handlebar risers and flat bars, it was a good running bike,
rode it that way for many years.

Had some mechanical problems eventually, and it got parked until I could find time to work on it.
Did some fancy paint on some new tins, stashed the "Sturgis" tins away, and
Picked up a 2010 FXDB "Street Bob" in 2011, it's a great daily rider, dependable and comfortable. Spent a lot of time painting the new tins, trying to get the flames "Just Right".... It's getting there, still have to do the electricals, cables, handlebar controls.  I had already done
a new clutch and primary chain, new rear drive belt, new cam and lifters....